If you’ve never received one of these, keep reading to see all the tricks in action. In the second article in this series, I explored how to spot a romance scam and what to look out for when you’re on a dating site, or any old social media hotspot.

In yesterday’s example, it was LinkedIn, starting with a random connection request from someone I didn’t know. In my business, it’s not that uncommon so I agreed and then a few hours later received this in my inbox.

I’m going to display the email in its entirety so you can spot the hallmarks of a scammer. Just to recap:

I hope this message meets you well. Thank you for connecting with me on LinkedIn, it’s a pleasure. I’m full of admiration and attracted to your picture and profile on LinkedIn at a first glance. Though LinkedIn is not a dating site, this is one chance and I am more than willing and ready to take the risk to contact you via your email, For me, it’s better to try and fail than to give up and never know if you could have succeeded. You are really looking so gorgeous to me and I couldn’t resist this action that I am taking right now.

Well, I will start to introduce myself to you now, My name is Thomas Roland from Scotland and I will love to connect with you on here, get to know each other better and see where it goes from here. Actually, am widowed and I was born on June 10, 1970,I was born in Scotland but currently, reside in Westminster London. I find very much peace and tranquillity there. I am a Contractor that specializes in corrosion treatment both in offshore and onshore oil facilities and also a consultant in the field…

I am the only child of my parent, My weight is 85kg and height is 190 cm, mentally stable, physically fit, a bunch of laughs, warm, caring, honest, good listening, God Fearing, and a positive person. I am a real easy person to talk to and a good listener. I enjoy chilling with good friends, I like going to the cinema or watching movies in my room, I like swimming, fishing, listening to music and dance to any kind of music, travelling, going bowling and also a good cook, I can make crepes, pasta, Italian, and anything from scrape and my favourite are chips with chicken, shrimp, crab and rice. I am a family oriented person and there is more, but it would be better for you to find some things out for yourself…

As a widowed, I am seriously in search of a good friend whom I can tell my good and bad moments because life is too short to spend it in loneliness. I hope we can get to know each other on a personal level. I am in search of a good friendship. Please get back to me so that I can tell you more about myself. You twinkle my fancy. Hope you have a blessed day, as I hope to read from you ASAP.

Thomas (not the name of the LinkedIn connection by the way).

And here are the photos he sent with his delightful email: 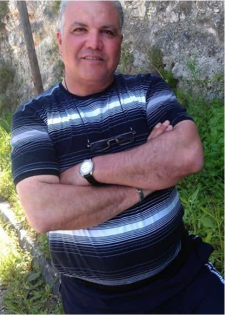 Did you tick off all the hallmarks of a scam? They’re pretty obvious with a little education about a scammer’s MO or a quick course in Romance Scams 101.

I don’t know about you, but I find it very easy to resist ‘Thomas’ – though that wasn’t the case when I was scammed as fresh meat on an Australian dating site called Oasis.

Flashback to the time a romance scammer targeted me

Although it wasn’t my first month giving online dating a red hot go, in hindsight I was still greener than well–irrigated pasture. Initially, I fell prey to this young man’s good looks, pleasantly followed by a cheeky back–and–forth flurry of messages on the dating site. Within a day, we’d moved to kik, and then to what’s app.

From there, things swiftly escalated and he played every card in the book – the motherless child, the successful young business entrepreneur, the loneliness of his life in Botswana, the nanny who looked after the three–year–old son while he was at work. He love bombed me every which way to Friday, taking the conversation up a notch very early, although things never got smutty or sexual – which is vastly different from how Australian men were behaving and quite refreshing in comparison. He wrote and sung me a song and sent me the audio file – he was genuinely talented!

You’ll see all the techniques he used, the calculated ploys and the obvious spelling mistakes, and I overlooked these mild concerns at first. It was easy to make excuses – his story created ample room for explanations – and I really wanted to believe him.

Plus, I was hella attracted to him, which stupidly swayed my judgement. He quickly sucked me into the vortex of constant messaging from dawn until late at night, then the drama of a Skype call (with a dodgy internet connection that affected his camera), followed by a long phone call, a trip to neighbouring Zimbabwe (he sent me a video of him in the jeep, then him filming elephants at close range – who wouldn’t be charmed?), and finally the wedding he and his son attended (of course he shared the adorable photos).

He’d told me about every tiny detail of his life and I’d shared some details about mine too. By that state we were messaging every day, all day, no exceptions. He invested a lot of time in me.

Most importantly, I’d let my guard down and started to think of him as an intimate friend, someone who had real potential for the long term. It’s no surprise that he soon declared his serious interest in me and talked about needing to make a decision about which Commonwealth country he’d migrate to in an effort to leave the increasingly difficult Botswana. He was intently focused on building a new life for the kid. I didn’t want a pre–schooler though, so this was a hitch and not an added bonus for me.

That’s when the sudden problems and the complicated game of proving his sincerity really began in earnest. I started having doubts, and I gave him an ultimatum.

Next time, I’ll share with you my story as it unfolded. You’ll have the benefit of knowing in advance that I was being scammed, which obviously, I didn’t have.

I don’t regret this episode in my dating life though. I learned a lot, and the twists and turns make for great story–telling. But I was vulnerable, far too trusting, and I got hurt. I lost another chunk of fragile faith in human nature and in men.

Stay tuned for my real–life story of being romance scammed to come next post.

3 thoughts on “What a romance scammer’s email looks like”